Visit Leuven in Belgium, trust me, it`s worth it. I`ll tell you what`s out there as I`ve lived in the city during my college years and have to admit, even though at that time I liked living there, it wasn`t until a recent visit I saw it through different eyes. When people think about visiting Belgium, they go to Brussels and maybe Bruges, but only 30 kilometers or an easy half an hour train ride from Brussels there`s Leuven, a vibrant city with so much to see and do.

I call it a vibrant city because of the many students that bring this city to live. The city is home to Belgium’s oldest and largest university, the Catholic University of Leuven. It is considered the oldest Catholic university still in existence.

Okay, let me take you on a tour along a few of my favorites.

This building, in my opinion (and I might be biased as a Belgian) is one of the most beautiful City Halls I have ever seen. The details are incredible. 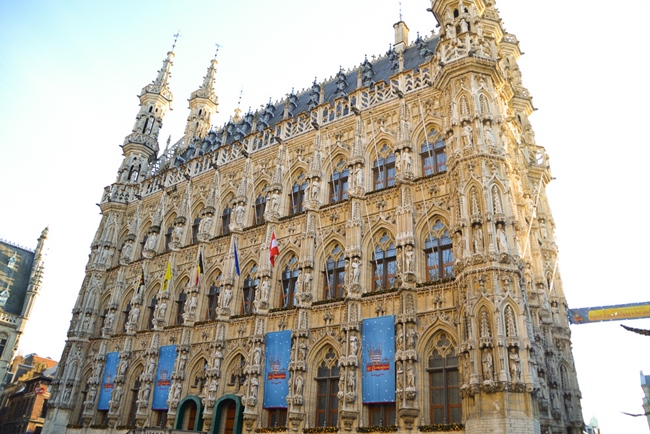 Not only can you admire this masterpiece from the outside, there are also tours available to have a look inside, every day at 3pm. (For more info)

Saint Peter`s Church is the oldest church in Leuven. It was presumably founded in 986. It`s situated on the Grote Markt, across from the City Hall. Here you can visit the The Treasury of Saint Peter’s which is located in Saint Peter’s Church. where you can admire The Last Supper, painted by Dirk Bouts, which is an absolute masterpiece. Dirk Bouts was one of the Flemish Primitives.  (For more info) Leuven contains two UNESCO World Heritage Sites, The Belfry on St Peter’s Church is a part of the Belfries of Belgium and France and the Groot Begijnhof (Grand Beguinage) is part of the Flemish Beguinages.

The Grand Beguinage (or in Flemish Groot Begijnhof) is a well preserved and completely restored historical quarter containing a dozen of streets in the south of downtown Leuven. About 3 hectares in size, it is one of the largest still existing beguinages in the Low Countries. The complete béguinage is owned by the University of Leuven and used as a campus, especially for housing students and academic guests. You can visit the Beguinage as it is open to the public and free of charge.

I used to love wandering around here, it`s a little oasis in the city where you can just relax and admire the garden. The garden is located at 30 Kapucijnenvoer. It`s open every day from May to September from 9 am to 8 pm. During the Winter Months, between October and April it`s open from 9 am to 5 pm. Admission is free. (More info) Another beautiful historic building is the University Library at Ladeuzeplein, I can`t remember how many times I`ve walked past it, but it always looked grand. Either during the day or light up at night. The library is still being used by lots of students to find a quiet place to study.

There is plenty more for you to visit, these are just a few of the sights I like in Leuven. If you`re looking for more tips, check out the official website.

Where to Eat & Drink?

De Werf, this used to be one of my favorite places to either go for drinks, a nice lunch or one of their yummy desserts. Not only the food makes this a lovely location, it`s also the concept they use. The interior looks like a construction site, hence the name “De Werf” or “Construction Site”. The dishes are served in a special way, like bread in bread containers, chocolate mousse in a  mug and so on. This place is known among the students (read it can be busy) and is only open during weekdays.

A nice spot if you like a wide variety of dishes on the menu is “Notre Dame” at the Grote Markt. Affordable prices and plenty to choose from (think soup, appetizers to main courses).

If you`re looking for coziness and a bit of a Mediterranean feeling, you should walk into the Muntstraat in the Summer. Tables from the many restaurants fill the street and you can find a diverse choice of international cuisine. From Italian at Quo Vadis to Mexican at New Mexico and plenty more.

I love having breakfast at Het Dagelijks Brood or better known as Le Pain Quotidien, located in the Parijsstraat. It`s one of my favorite breakfast places all over the world as it`s a Belgian chain and this way I don`t need to miss the yummy bread I`m used to. You can also have lunch here as they offer soups and sandwiches. I especially included “Where to Drink” in my caption, as Leuven has the Oude Markt which is called The longest bar in the world, because of all the bars on one square market. So plenty of places to choose here!

Not your cup of tea so many bars, then why not try the Domus, which has a home brewery were you can try 3 of their beers. Or maybe you`re more like me and you prefer cocktails, the De Professor is the place for you.

As you can see, you shouldn`t skip Leuven when visiting Belgium and due to its close proximity to Brussels it`s perfect for a day trip too. Even though I think you can easily spent a couple of days here. All year long, the city of Leuven has festivals and events going on from a rock festival in the city to a culinary trail with plenty of snacks and atmosphere. And then I haven`t even mentioned the shopping opportunities. I can honestly say, there`s something for everyone here whether it`s history, culture, cuisine or entertainment.

Have you been to Leuven yet?