Salzburg is one of my favorite cities to visit, but I never came around to doing the Sound of Music tour until this time. Yes, I admit I`m one of those girls that`s seen the movie too many times! To be able to see the locations and stand in front of them was a great experience.

The Panorama Tour starts at “Schloss Leopoldskron” (Leopold`s Crown Palace). The palace was used as inspiration for the terrace scenes at the rear of the Captain`s villa overlooking the lake. You know when Maria and the children stood up in their boat and fell into the water, wearing the curtains as outfits. Next stop: the Glass Gazebo. Who doesn`t remember the gazebo where Liesl and Rolf sang “Sixteen Going on Seventeen”? It was constructed in Salzburg close to the lake of Schloss Leopoldskron for use in the movie. Afterwards it was moved to its present location at Hellbrunn Palace. We drove past Schloss Frohnburg. The backside of this palace was used as the front of the von Trapp residence where Maria stepped off the bus. To get to this site, you have to either go on foot or bicycle.

You see the Nonnberg Abbey from a distance and you make a lovely ride to the Wolfgangsee. Driving around here definitely made me want to go back and see more of the lakes in the region. Even though it was cloudy and raining, it`s still a beautiful sight. Before the tour ends you get to spend an hour at Mondsee, home of the wedding church where the Captain and Maria got married. In real life though the Captain and Maria married in the Nonnberg Abbey where Maria was a novice. The abbey church was not big enough for filming so the church in Mondsee was chosen. 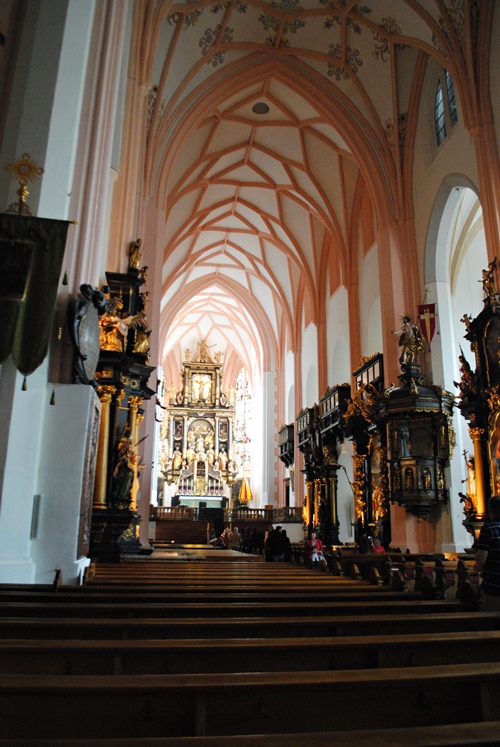 Several scenes of the movie were filmed in the beautiful Mirabellgarten. This part is not on the tour, but you can easily walk around yourself in the Mirabellgarten, the entrance is free and it`s a great way to spend some time wandering around. As you can see, the sun came out that day. The Tour is about 4 hours and leaves daily at 9.30 am and 2.00 pm. Prices start from 37 euros/adult*. Even though the weather wasn`t the best on my tour I still enjoyed seeing all the different film locations and it`s also a good way to see a bit more of the regions around the city of Salzburg, like the lakes. I do think you should have seen the movie to appreciate this tour.

Want to know more about Salzburg, check my travel guide with tips.

*Prices were accurate at time of publishing.

I received a complimentary Sound of Music Tour from Panorama Tours.