I’ve decided to add a ‘Favorite Blogger’ series on my website. I know you like to read my travel stories and tips (well, I hope 😉 But I think it’s interesting to hear another voice telling about their travel experiences! And let’s face it, I can’t be everywhere in the world, even though I wish I could 🙂

Located at the beginning of Australia’s Great Ocean Road, Torquay is the home of surfing in Australia and is known for Bells Beach and being the birthplace of famous surfing brands Rip Curl and Quiksilver. 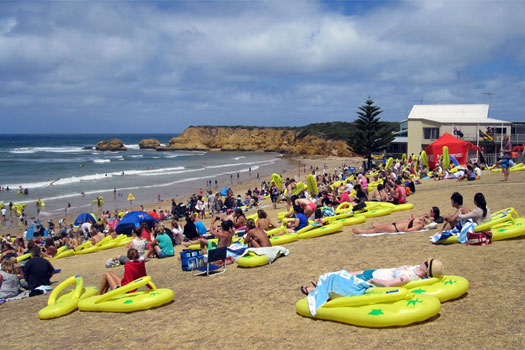 For those who are thinking “what the hell?” – no, it’s got nothing to do with underwear. Thongs are the Australian word for flip-flops and I made the journey to Torquay on Australia Day with Amy in an attempt to set a Guinness World Record for the longest line of giant inflatable thongs in the ocean.

We pre-registered online and all we needed to do after arriving at Torquay Beach was decide whether we wanted to be in deep, medium or shallow water, collect our giant thongs (thankfully already inflated!) and listen out for the announcements.

Soon we marched off to Cosy Corner with over 1200 others and in a show of unity and patriotism on Australia Day, everyone sung the national anthem with pride before a chant of “Aussie, Aussie, Aussie” echoed around the crowd. 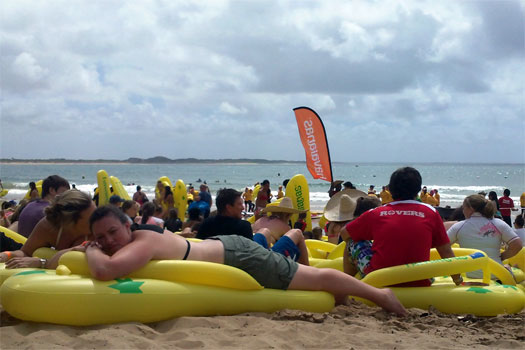 After a short wait we entered the water through the barriers and paddled our way out into the ocean. Three world record attempts were next, linking arms with the person next to you until the siren sounded.

Torquay ended up with 1236 people participating in the Havaianas Thong Challenge, bettered by the new world record holders at Cottesloe Beach in Western Australia with 2088 people. To see more from our day, here is a video we put together of our adventure.

And of course, it isn’t an Australia Day without finishing it with something on the barbecue. The Havaianas Thong Challenge really is a “sandsational” day and we can’t wait to go again next year.

Kieron is a twenty-something marketing graduate from Australia with a background in web/graphic design and a passion for travel. He has recently returned from an extended trip around the world with his partner Amy that has been blogged about extensively at Don’t Ever Look Back. You can also find him on Facebook or on Twitter (@amzkiz).